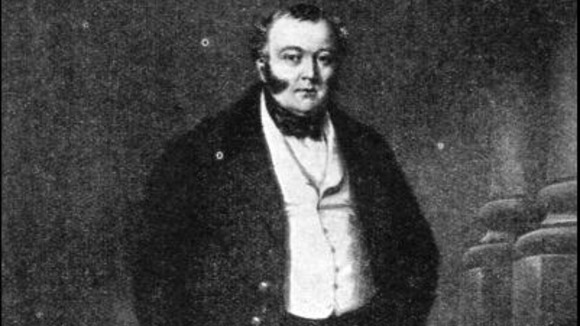 York’s ‘railway king’ George Hudson was born at Howsham in 1800.  He was a son of the High Constable of Buckrose, John Hudson, a farmer. George Hudson was famous for his entrepreneurial rail network ventures, but also for his wrongdoings in business.

Following apprenticeship to drapers Bell and Nicholson of York he became a partner at 21 when he then married Elizabeth Nicholson; they had seven children. The business grew becoming the largest business in York. Hudson became a wealthy man following a relative’s bequest in 1827 duly investing £30,000 in North Midland Railway shares. He then became chairman of the York and North Midland railway.

From being a Methodist and a dissenter Hudson changed to become a High Church Tory. In 1833 when joint stock country banks were first allowed to conduct their business in the City of London Hudson took a prominent role in establishing the York Union Banking Company becoming its director.

In 1835 Hudson was elected to the newly-reformed York City Council. That same year he met George Stephenson; they were friends and business associates until Stephenson became suspicious of Hudson. Hudson successfully formed his own railway company linking York with the West Riding after raising £446,000 in 1839 and together with Stephenson carried out the extension of the York & North Midlands Railway (Y&NMR) to Newcastle.

Overseeing 1,000 miles of railway track, Hudson became known as the ‘railway king’. His involvement in establishing the Railway Clearing House of 1842 allowed independently-owned railway companies to acquire revenue from fares charged for passage over the lines of more than one company.

Hudson invested in the Great North of England Company seeing its line to Newcastle-upon-Tyne open in 1844. However, to obtain consent from the House of Commons he distributed over £3,000 in bribes. Another dubious venture was his formation of the Midland Railway Company raising £5m to link the Midlands with Scotland when Hudson personally assured investors the payment of a six per cent dividend.

An 1845 survey showed Hudson with £319,835 invested in railway shares, which he continued to buy including a controlling interest in the Newcastle and North Shields Railway and the Great North of England Railway. However, he was found not to be entering vital details in the account books.

Finally, facing aggression from ruined railway share investors, Hudson resigned as chairman of all the railway companies under his control. His political and railway rival George Leeman of York was involved in investigating all Hudson’s fraudulent dealings leading to his downfall with Leeman succeeding him as chairman of the York, Newcastle and Berwick Railway in 1849.

In spite of admitting the offences and agreeing to pay back all monies owed, Hudson remained as MP for Sunderland, a seat he held from 1845 until 1859. When the shareholders went unpaid Hudson was imprisoned in York Castle in 1865, being released in 1866 after friends paid off his debts

Hudson served as Deputy Lieutenant for Durham and was three times Lord Mayor of York.

After spending much of his later life on the continent George Hudson died in London in 1871.

Hudson House, built on the site of the former Y&NMR terminus in York, is named after him, along with George Hudson Street.